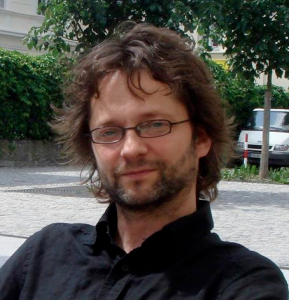 1995 – Licentia doctorand in composition from the Sibelius Academy in Finland

1991 – Candidate of Music (Cand.Mus) in composition from the Sibelius Academy in Finland

1984 – Bachelor of Music (BMus) from the Reykjavík College of Music

2005 Iceland University of the Arts: Professor and programme director of composition & theory

2001 for composition of the year

Kjartan Ólafsson is one of Iceland‘s best known composers and researchers within the field of music. He has composed music for chamber orchestra, solo instruments, voice, and electronics; computer music, large scale orchestra works and concertos, music for theatre and music for children. His music has been performed in concerts in over 30 countries, e.g., in international festivals such as ISCM, ICMC, Nordic Music Days, Dark Music Days and ErkiTid. His Viola Concerto received the Icelandic Music Award in 2002 as Composition of the Year. Many of his compositions have been released on CDs’ see here. Kjartan is a renowned Icelandic musicologist, a notable composer and an authority on AI in classical music composition; he has served as Professor of Composition and Theory at the Iceland University of the Arts and is currently conducting artistic research on the use of AI in composition. He currently works as a composer, CEO of Erki-Tónlist sf., director of the artistic research project CALMUS Automata and lecturer about AI in composition.

Kjartan is currently directing the largest  international  research project in music in Iceland, CalmusAutomata. His investigative work into composition, based on the use of Artificial Intelligence for musical composition, is internationally acclaimed. Among his research topics are the development of AI analytical functions, such as for cell creation, cell complexity, melodic development, scales, and for algorithmic evaluation of harmony according to colour, tension and harmonic (overtone) relations. Other topics include AI generative functions for melody construction and harmony control with metamorphosis options. The result of his research includes numerous diverse compositions; concerts; a dance project where dancers control the composing process; music composed in real time with the help of audiences; written articles; workshops; lectures; demonstrations; a TV program; and educational activities and outputs. CalmusAutomata is one of the first artistic research projects to receive a financial support from The Icelandic Centre for Research supported by the government. The grounds for this support is the cooperation and interaction between artists, academies, companies and the innovative companies. Apart from the main software, CalmusComposer, there are three innovation projects that have been completed through the cooperation between these partners.

Since 1994 Kjartan has taught at all levels of the Icelandic school system, although mainly within Higher Education – the Iceland University of the Arts (2001-2014) and the University of Iceland. He was appointed as the first professor in composition in Iceland in 2005 and has been visiting professor at over 20 universities and academies around the world, giving master classes and private lessons in composition.

Kjartan has given numerous lectures abroad with special emphasis on AI in composition and the CALMUS composition program.