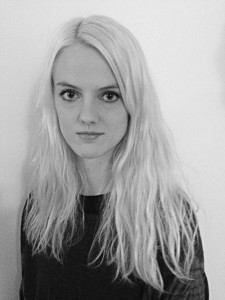 2004 The Artistic Music School of Reykjavík finished 5 degrees of 7.

Védís has danced in variety of performances such as Da Da Dans by Rósa Ómarsdóttir and Inga Huld Hákonardóttir with the Icelandic Dance Company, Quartetto per Oggetti by Camilla Monga at the Venice Dance Biennale, KVIKA by Katrín Gunnarsdóttir, Scape of Grace and Predator by Saga Sigurðardóttir, Reið by Steinunn Ketilsdóttir and Sveinbjörg Þórhallsdóttir and Transaquania by Erna Ómarsdóttir and Damien Jalet. KVIKA, Scape of Grace and Reið were all nominated as Dance-pieces of the year at Gríman, The Icelandic Theater Awards, during the years 2013-2016. She also danced in Fetta Bretta by Bird and Bat which was nominated as Children performance of the year at Gríman in 2014. Védís also performed in Giselle by Halla Ólafsdóttir and John Moström which was a collaboration between Reykjavík Dance Festival, Lókal and The Icelandic Dance Company. Védís was nominated as Dancer of the Year two years in a row by the Icelandic Performance Art Award in 2017 and 2018.

Védís created and performed Future Standards of Living with Simon Portigal og Inga Huld Hákonardóttir, Better Lock it in Your Pocket and Natural Order is a Special Case in collaboration with Louis Combeaud. She also created Snoð as a part of the collectiove HNOÐ and The Looser Generation with Ásrún Magnúsdóttir and Kara Hergils Valdimarsdóttir. Natural Order is a Special Case toured around Europe and was performed in Russia, Turkey, Belgium, Germany and Portugal to mention a few. Védís was a special guest artist at Reykjavík Dance Festival in 2012 and has been an assistant choreographer for pieces like Shades of History by Katrín Gunnarsdóttir and Calmus Waves by Kasper Ravnhoj at Reykjavík Art Festival in 2016. Védís created and performed Moving Mountains and Øland as a part of the collective Marble Crowd. Moving Mountains was nominated as the production of the year 2017 in Europe by Tanz Magazine. Marble Crowd was also listed as Rising Stars in Performance Arts in Tanz Magazine 2017. They were nominated as choreographer of the year 2019 by The Icelandic Performance Arts Award.

Védís has taught at the Iceland Academy of Art and Reykjavík Dance Atelier and has given workshops in both LungA School and at LungA Festival. She is a board member of Reykjavík Dance Festival. Védís has also done some promotion- and/or production work for Bird and Bat, ErkiTónlist and CALMUS.